It’s a girl! Well, we’re pretty sure it is. :) the u/s tech wouldn’t say definitely but she was pretty sure so unless the little boy parts were hiding, Emma’s going to have a little sister. We had the u/s last week. I'm not 21 weeks, so I've finally passed the half way point. It's definitely going faster this time - thanks to Emma, I guess. Unfortunately, the morning sickness is still here. Not as bad as it was, but I'm still close friends with the toilet. I'm 20 weeks in this picture. Not the best, but you can see my belly so it works. Everyone who sees me can't believe how far along I am. Apparently, my belly looks small? I guess it's all that puking!

Officially in my 30’s

I turned 31 last week. And I had a really great birthday week. Celebrated with Michael's family Tuesday, my family on Wednesday and with Michael and Emma on Thursday, my actual birthday. Kudos to my husband for my fun gifts - Swivel Sweeper (from Emma, to clean up her messes, office chair and table for scrap area and paper shredder. All things I've been wanting but never wanted to actual buy. Very fun. 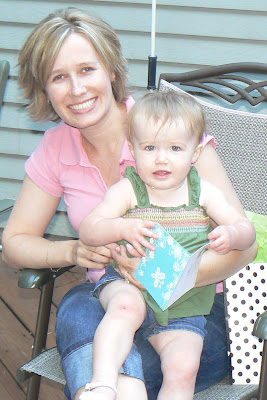 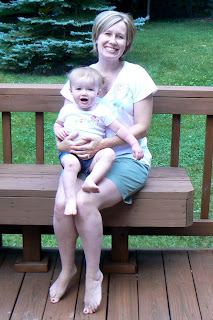 Look at my niece. I just KNOW she isn't sticking her tongue out at Bon Jovi, but rather her uncle taking the picture. :)

Emma really liked the cake! And feeding herself said cake even more! 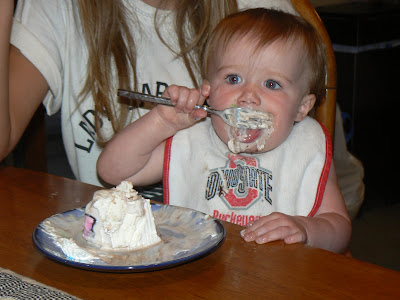 Michael went shopping for Emma, so check out her new duds - white and pink Nikes, pink Indians hat and an Indians jersey. She also got an Indians t-shirt and an Indians outfit. I took these at one of Michael's games last week. She'd push her baby stroller over to the mound of dirt and the rocks, play, then push her stroller back. It was pretty funny. 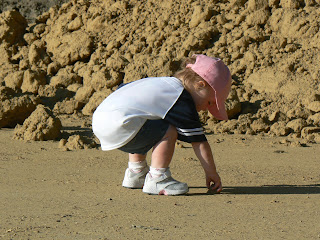 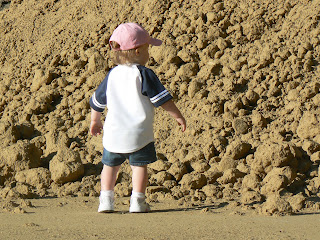 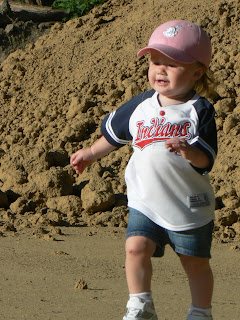 So, speaking of my daughter - the one who doesn't eat vegetables...yesterday she decided she likes green beans after all, we were very excited. Tonight at dinner we had shish kabobs and Emma loved the chicken and ate more green beans. Then she had a piece of red onion - and she liked it! And she wanted more and more! She ate a bunch of red onion and a couple bites of green pepper. What 16 month old eats red onion???
Posted by Erin at 6/28/2007 09:36:00 PM 2 comments:

Lots has been going on and while I thought I'd be doing a much better job at blogging, I still stink. Emma will be 16 months tomorrow. Crazy! She's talking ALL the time. She doesn't shut up. Her favorite words are Doggy, Daddy, Mommy, Baseball and Hi. She just started saying Hello (sounds like Hi-Yo), Pizza (sort of sounds like it, but we know that's what she means), Yeah and Bye. She can also say Baby, Ball, Pool (her own version) and other words that I can't think of right now. She's obsessed with her shoes, loves to put them on and take them off. and she's a rotten little thing. When she knows she shouldn't do something she'll either look at us to make sure we're watching and do it or will gleefully run around with an evil (but cute) little smile on her face.

Today, she got her first full-contact bloody nose. This is how it happened. She took one of her cups and put it up to the fridge, trying to get water out of the water/ice dispenser. I gave her a little bit. Then I had the bright idea to give her one of the Tupperware sippy cups, the ones that AREN'T spill proof. She was doing fine at first, then she discovered that if she turned it upside down and shook all the water would come out. Oh, did she love that. I told her no, got up to take it from her when she decided to get away. And promptly slipped and fell in the water. Face first. Landing on the sippy cup. Right on the nose. Lots of blood. Lots of screaming. Lots of tissues. I finally got it to stop but every so often for the next hour a little bit of blood would seep out. She did get a little cut above her lip but she's now fine.

Tuesdsay, Emma visited the zoo for the first time. We went with Mom, Tara, Rachel and Rachel's friend Alexa. Michael has basketball camp this week and our newphew Michael has been attending it, so it's been a busy week.

The first animal Emma saw was an elephant. 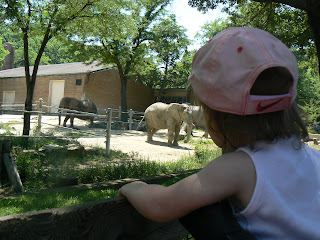 She really wasn't all that interested in any particular animal until we saw the sea lions. Then she got really excited, she didn't want to leave them. 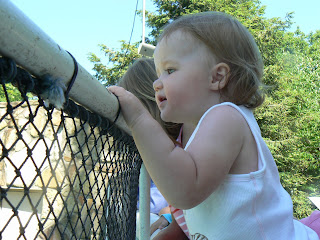 I thought she'd be in to this a little more, but she lasted about 30 seconds. Then all she wanted to do was climb the stairs. 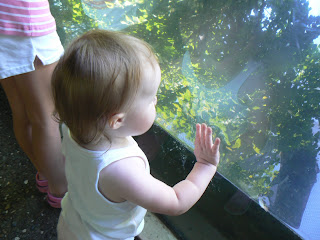 And this is what she did whenever we let her out of the stroller - Run! Seriously, the girl doesn't know how to walk. She either isn't moving or she's running. 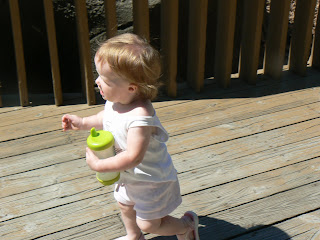 Check out my Slide Show!