While I was gone

Emma had a busy week while I was in Colorado, Michael too. Michael had baseball games 5 nights, so Emma spent a lot of time with Grandma and Grandpa Sweeney. She ate corn-on-the-cob for the first time, played at Grandma's, learned to say "Here ya go" "Grandma" and Grandpa", started walking up and down the stairs all on her own while holding the railing, went to a petting zoo and had her hair done each morning by the girls at Kid Park while Michael worked out. Oh, and she didn't even know I was gone. :) 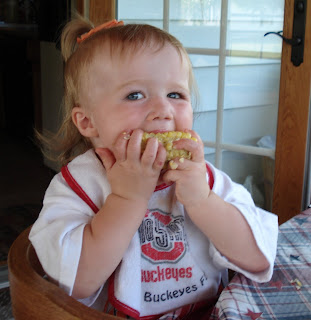 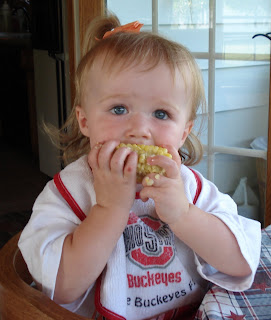 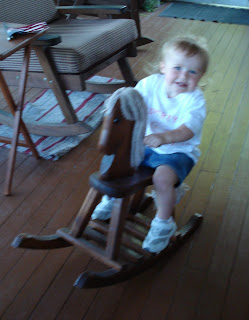 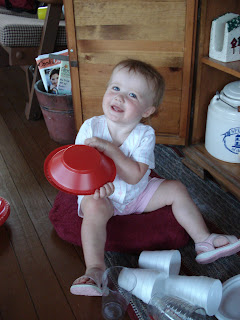 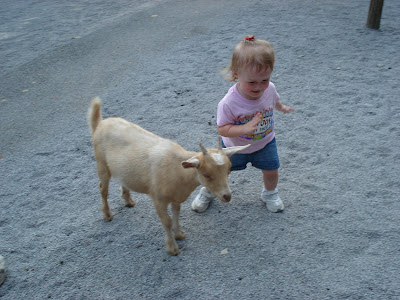 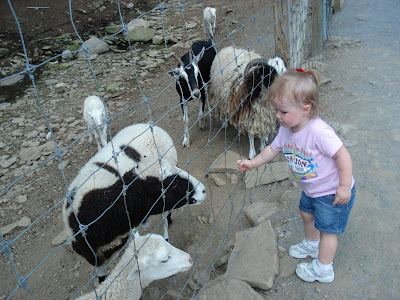 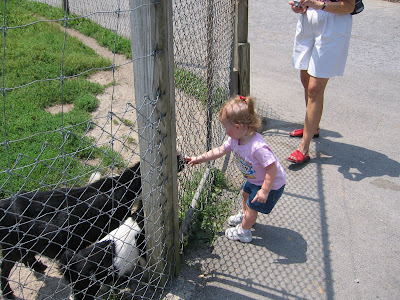 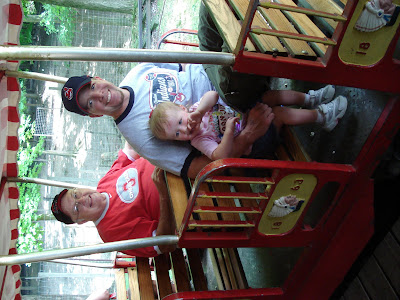 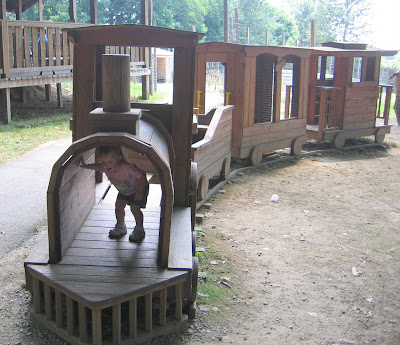 So, the first thing I noticed about Colorado is how flat everything is. Except for the giagantic mountains of course. But really, it's flat. Wasn't expecting that. I can't believe I've been home two weeks already. The last two weeks has flown by and I thought I should post about my trip before too much more time went by.

Now, I did have a hard time leaving. And I was homesick. In fact, I started crying when we turned on to the airport's road and was sobbing by the time I was in line to check in. Hardest thing I've ever done leaving Emma. Leaving Michael, well...Ha ha! :) (Just kidding honey!) I'd never been away from her except for one night. And even that wasn't even a whole night!

I had a fantastic time. It was great to see Ashlie. And Lee, Tabitha and Ethan. I hadn't seen Ashlie and Ethan since January 2005. Waaay too long. When Ashlie picked me up at the airport, it was like those 2 1/2 years hadn't happened. We slipped right back into our friendship. So nice to have a friendship like that. Wish she lived closer.

Here are Ashlie and I at On the Border. It's a Mexican Applebees. Seriously. And we didn't plan the matching shirts. Or that we'd match the restaurant. Oh, and in case I didn't mention it, she's pregnant too. Due September 20th. 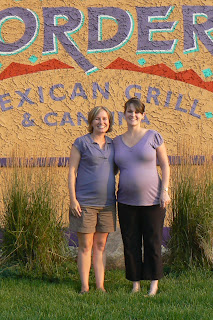 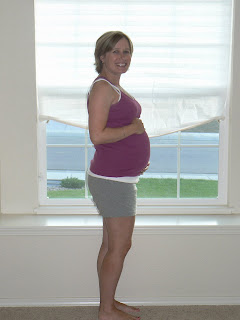 All the houses on the flat land. She's in Colorado Springs and I swear as far as you can see it's new houses. Crazy. 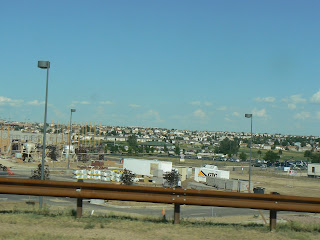 Friday we went to Woodland Village to walk around. It's up in the mountains and it was a beautiful ride there. On the way, we passed Santa Claus Land, a kiddie amusement park. Granted, I could only see the ferris wheel sticking up above the trees on the side of the mountain, but that's what it was. 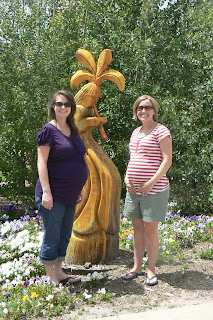 So, we hear Sonic commercials ALL the time. But, the closest Sonic is 2 hours away. Annoying, isn't it. But in Colorado Springs, Sonics are everywhere. Oh, to be able to have a yummy Sonic slush whenever I want! 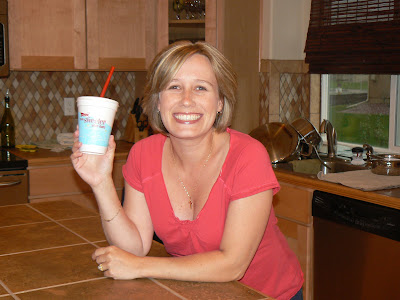 The one tourist-y thing I wanted to do was visit Garden of the Gods. We decided to do that the Saturday before I left. And after a week of beautiful weather, it decided to rain that day. Of course. So instead of walking through, we drove. Still was cool to see all the rock formations. We went to the gift shop afterward and they had this giant buffalo you could take pictures with. So of course we did.

Ashlie and her family. 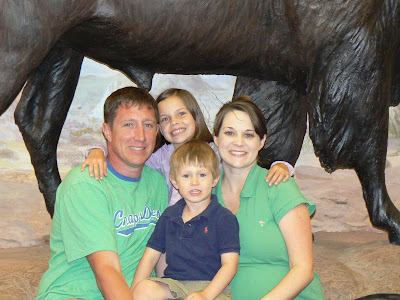 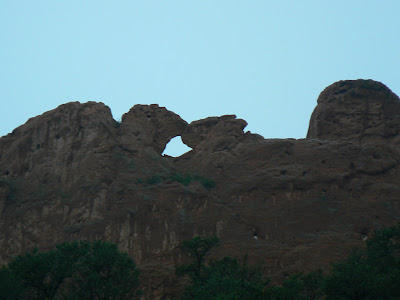 And our version of the Kissing Camels. :) 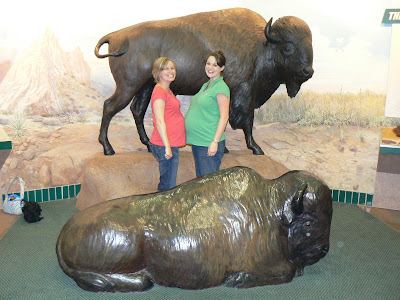 Is 18 months old. :) She loves to run and climb. She eats better than her Mommy - eating lots of fruits and veggies, chicken, beef, pork and fish. She eats sandwiches with lettuce and tomato (something her Mommy doesn't) and chicken quesadillas. Her new thing is walking up and down the stairs on her own. She's only fallen once, thankfully. She loves to dance anytime music comes on. But especially to Choo Choo Soul on Playhouse Disney. She loves for us to play it on the computer. She can jump and actually get both feet off the ground. Her new favorite toy is her Learning Bunny. Yesterday was her first day going binky-free for her nap and at bedtime. Nap #2 is going on right now, again, binky-free. Earlier this week I had to spell my first word in front of her, e-a-t, so she wouldn't run upstairs to the fridge. She'll give you "the rock" while making the kissing sound. :) She's talking more and more. I've lost track of the words she says. She knows what sounds a cow, doggie, kitty, sheep and duck make and will make them too. But, any animal she sees is still a doggy. Ha ha! When you ask her what a monkey does, she puts her hands in her armpits and says "ooh ooh" and when you ask her what a bird does she flaps her arms. She loves to go on bike rides with her daddy, although she doesn't like to wear her helmut. She likes Elmo and as of this week, loves Dora. She rarely sits still, is full of energy and always on the go. She's amazing. So much fun. Makes us smile and laugh all the time. 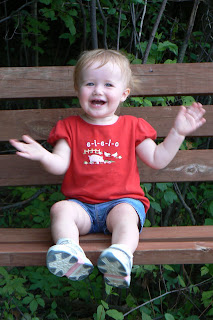 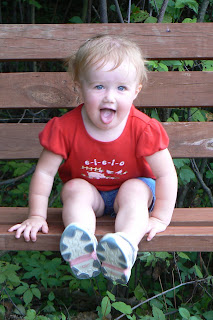 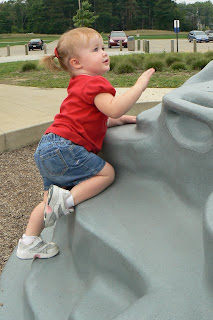 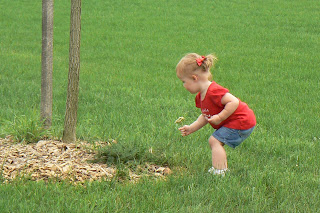