1. Sunday Emma and I went with Beth and Caroline to see Dora Live!, and the girls loved it. I'm so glad we went. Seeing the Emma's eyes light up, her joy, her excitement. It was awesome. One of the best experiences I've had as a Mother, being able to do that for her. Just awesome. 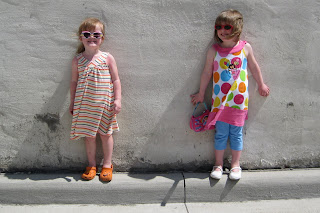 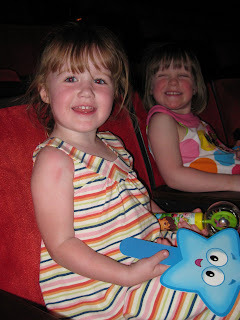 2. Met my new niece Corinne Saturday. (It was crazy windy that day, hence the crazy hair.) She was just one week old here, and absolutely adorable. I love babies. My babies are big now. I really liked holding this tiny little baby. Sigh... 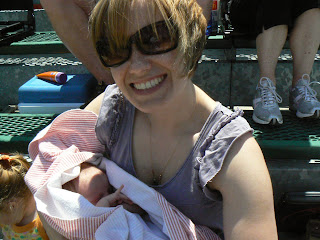 I realize that you really can't see her very well but it was sunny and windy and the only close-up I have, um, just isn't postable.


3. Speaking of the windy day, I learned you should not apply spray on sunscreen on these types of days. I know this because my back is bright red, except for little white dots where sunscreen actually landed on me. The rest was blown away by the wind. It hurts.

4. I also am not a very good sunscreen-putter-on-er at this time. I also missed spots on my shoulder, Emma's shoulders and her left calf, and Mackenzie's shoulders and a forearm. I suck.

5. The custard place is open. I never thought I'd like frozen custard. But when they opened last year I discovered I did. It's yummy. And they have great smoothies. And they're just down the street. Good excuse for a walk a couple nights a week.

6. We were there Sunday night. Emma started off with a cone, but once it became apparent that it was all going to melt before she ever ate it, we put it in a bowl and gave her a spoon. She hasn't quite gotten the hang of ice cream cones, yet. 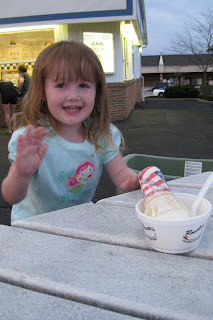 7. Have I mentioned Mackenzie's a crazy little monkey. She climbed up the rock wall on the big kids playground Friday night. She also attempted to walk down the slide. Multiple times. 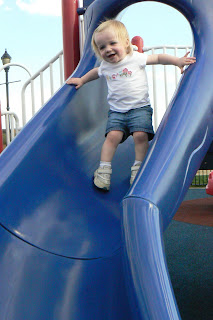 8. Emma has a new favorite song - Tunak Tunak Tun... by Daler Mehndi. We do a Bollywood routine in Zumba and now that Emma's heard it, she loves it. She calls it the "Da da da" song. Take a listen on itunes. :)

9. Has anyone read the House of Night series by PC and Kristin Cast? I just finished the newest one, #5. They're a lot different than the Twilight series, different from any vampire series I've read, actually. But I like them. I wasn't sure about them at first, but they've grown on me.

Keeper of the Snacks 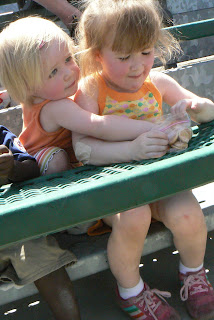 You can order one shirt, two tank tops and two pairs of shorts... 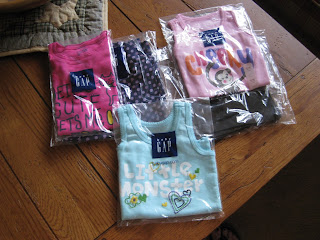 ...and it'll come in this nice little package that fits in your mailbox. No big box that's half empty. No wasted packing peanuts. That makes me happy. Because it's super annoying to get a big box with one little item in it. (In all fairness, Land's End did this, too, with Emma's bathing suit. So I love them, too.) 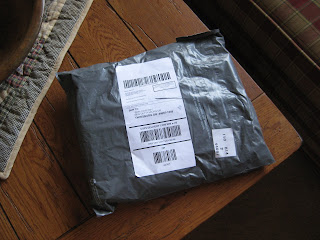 And a funny picture. Mackenzie fell asleep shortly after we left Michael's double-header Saturday. But Emma made it most of the way home. In fact, she stayed awake until we were about three minutes from home. And then she was out. And I couldn't wake her up. So I shut the garage door, undid her seat belt, left the door open and the light on and went in the house. I finally had to literally pull her out of her seat on to the floor to get her to wake up. She was so out of it. Four hours of running around in the sun will do that to a girl. I wish I'd been sleeping. Alas, I had to drive. 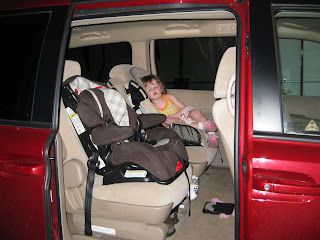 Ok. So I've just decided that Gap (or is it The Gap? I do both. "I got the girls these cute outfits at Gap." or "I got this super cute dress that makes me look 10 pounds thinner at The Gap.") is a weird name for a store. You know how sometimes if you say a word over and over it seems to lose its meaning and then just seems strange. Like it's not a real word? I could totally be the only person who does this. But all of the sudden Gap seems weird. The name. Not the store. Love the store. Gap. Gap. Gap. Gap. Gap. Gap. Gap. Gap. Gap. Gap. See, weird.

I've got a layout up at the American Crafts Studio blog for the four product challenge. Here's a little sneak peek of my page: 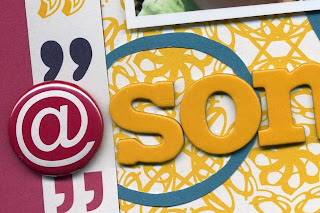 I know I haven't been blogging much. I've Menu Plan Monday on hold for awhile. It's baseball season, which means Michael isn't home much and when we attend games we usually eat out. Plus, with the lovely weather in Ohio, games get cancelled and rescheduled often enough that menu planning right now just doesn't work. I'd end up ignoring it. It'll be back once baseball's over though.

And I guess I just haven't been in much of a blogging mood. Some days I have ideas for posts but then don't get around to posting them, other days I've got nothing to say. Then I wonder if I even want to keep the blog going. Maybe I should take a break. But I won't. I need to keep blogging if only so I have things recorded for scrapbooking. I just pulled up a post from March for a layout last night. :) And if you're one of the three people who read Erin Hates Running, you'll see I haven't posted there in a few weeks. I will get back to it, and this one, on a more regular basis soon.
Posted by Erin at 4/23/2009 01:48:00 PM 3 comments:

She really liked the slide. 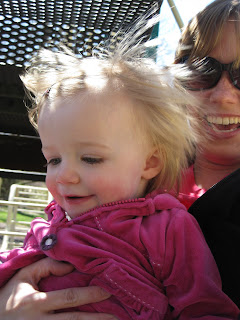 And the swing, too. 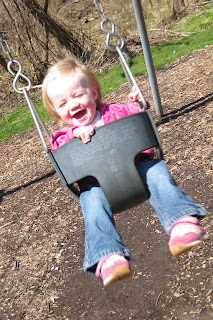 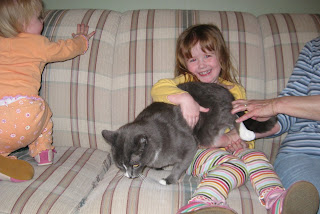 My sister's cat. My Mom is watching her while my sister's in Florida. (Where it's warm and sunny and 84 degrees, unlike here where it's cool and rainy and in the 50's.) Daphne, or Daph-a-nee as Emma calls her, just might've been the highlight of Emma's stay at Grandma's. She was fascinated by the cat. And it's not like this was the first time she's met her, but this time was different. She followed Daphne around, needed to know where she was at all times, and, of course, kept trying to grab her tail. Because a moving tail is hard to resist to a 3-year-old. Poor Daphne. I have a feeling she was very relieved when we left yesterday!

(I didn't crop the picture because it makes me laugh. My mom is trying to hold Daphne still, Daphne's trying to escape, Mackenzie's climbing because, well, that's just what she does and Emma is so happy to have Daphne in her lap that she's oblivious to it all.)

1. Sunday we celebrated Easter with Michael's family since he'll be in Florida and we'll be at my mom's. The best family picture we could get. Better than nothing, I suppose! 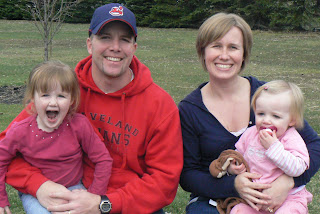 2. Emma showing off her eggs...in the Christmas basket. 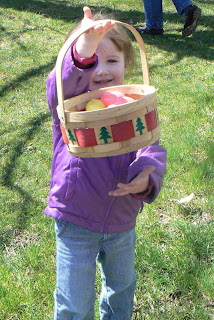 3. Mackenzie only found a few. She was more interested in just running around. 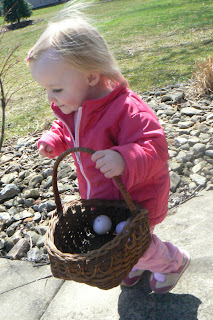 4. Checking out the candy. 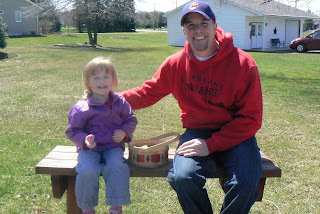 5. Looking in the Easter basket bag. 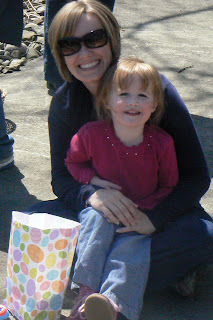 6. Trying to jump rope. It was pretty funny. 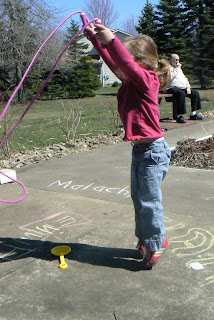 7. Falling off the motorcycle... 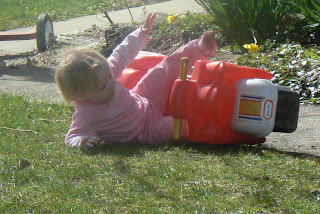 and a serious (or grumpy?) face. 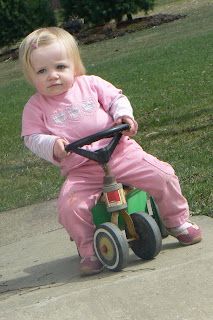 8. This might be one of the funniest pictures I've ever taken. Anna (top row) and Claire (bottom) wanted nothing to do with the picture taking. Emma kept clapping and in later pictures Mackenzie was laughing. Ben kept a smile on his face while Malachi wasn't sure what the heck was going on. And Rachel kept trying to calm Anna down. I love it. 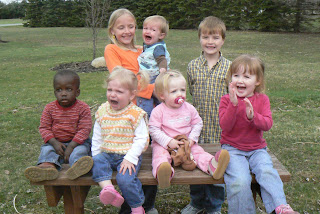 9. Emma on the phone with Aunt Tara last week, telling her all about ballet. 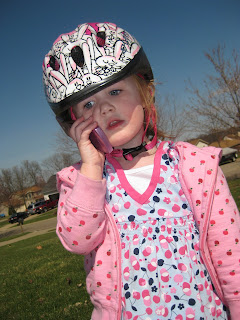 10. Riding the train at the mall last week. 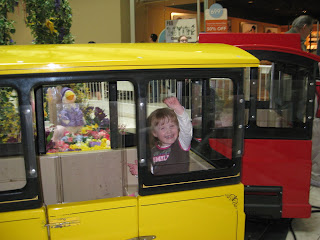 Mackenzie got excited every time Emma came by. 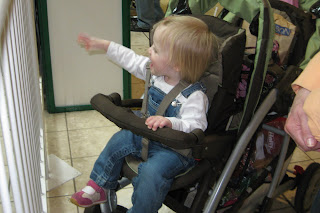 Today was Emma's first ballet class at Missy's studio. So, so cute. She loved it. And didn't want to leave when it was over. Which, by the way, seems to be a phase she's in right now. 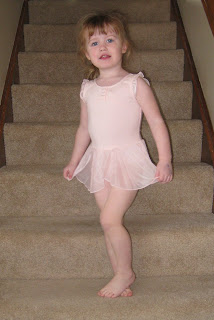 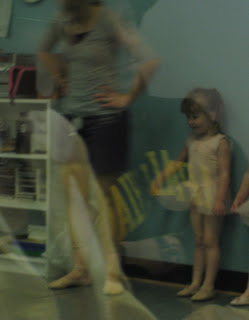 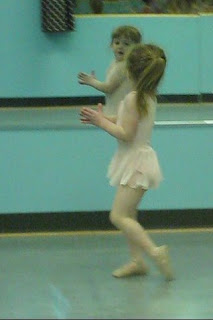 (Please excuse the not-so-good pictures, they were the best I could get with my small camera, I forgot the other one.)