Clearly, I have not paid this blog much attention in the last year. But that's about to change thanks to: 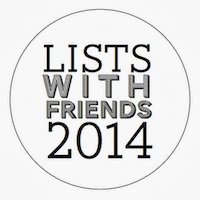 List #1 Emma's Bookshelf
(What she's recently read, what's literally on her bookshelf, and what's on her to-read list.) Emma will be 8 next month and she's a fantastic reader. She loves to read and flies through most books. Her go-to books are usually the Rainbow Fairy books, Junie B., Wacky School and the like. I'm trying to get her to branch out, try some different, longer and harder books. So far, so good.

1. Nancy Clancy Super Sleuth (#1).  Fancy Nancy as a detective. She read this pretty quickly and she liked it and immediately asked for the next one.

2. The One and Only Ivan. She just finished this tonight and she loved it!  This is the first big book she's read - bigger in that it took her longer and a half hour to read it as the Rainbow Fairy books do. (Her last Rainbow Fairy book she got at the school library and had it read when she got home just from bus time.)  She was very proud of herself for finishing it. 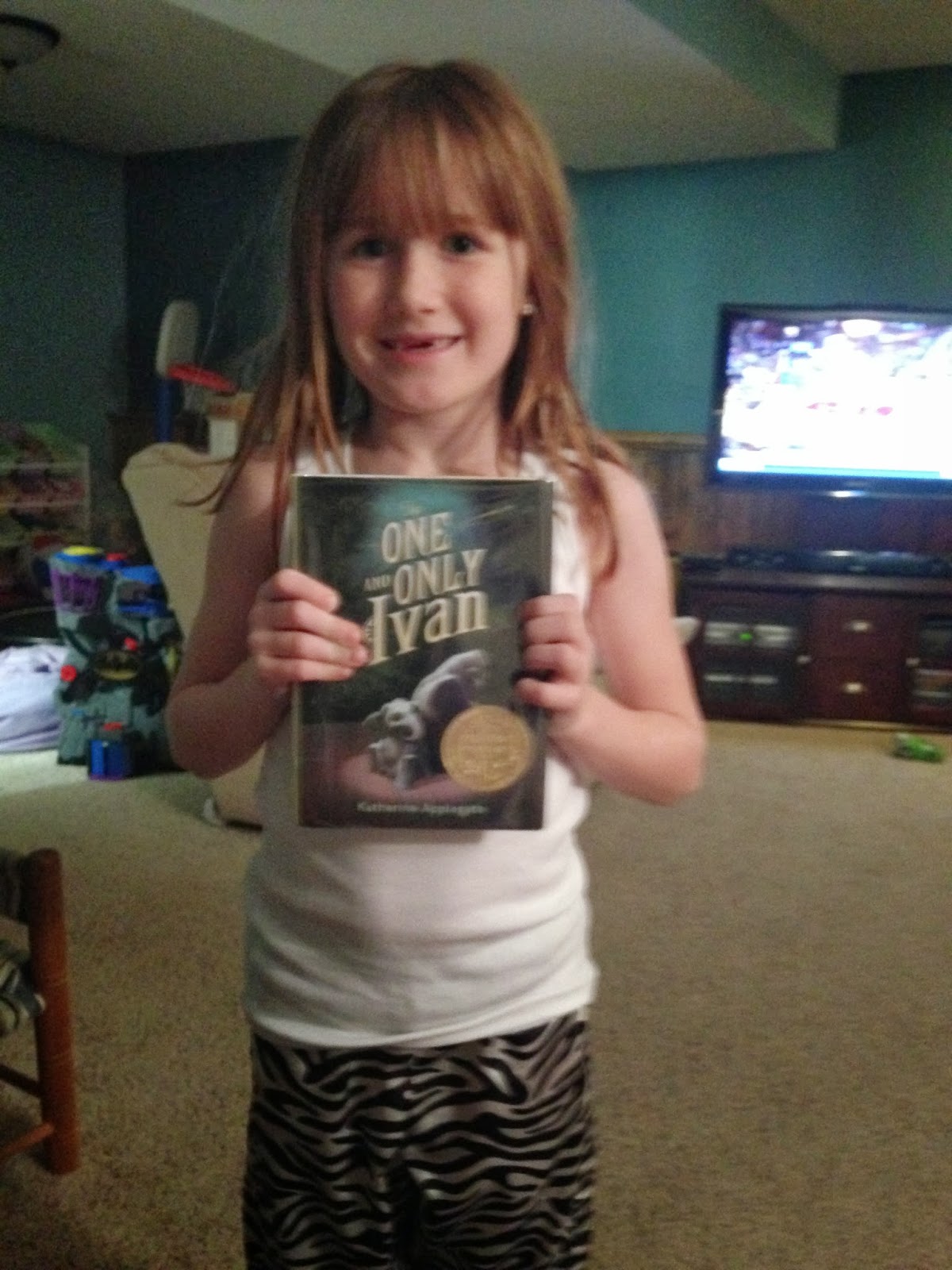 3. The Mouse with the Question Mark Tail. This is the book Emma is starting next. It's about a little mouse living in Buckingham Palace.

4. A Gaggle of Goblins (Unseen World of Poppy Malone Series #1). We actually saw the third book in the series (about mermaids) in the library but because of my You Have To Read Books In The Order They Were Written rule, she got this one instead. She's a little nervous about the goblins and said she doesn't want to read it at night in case it gives her nightmares.

5. Harry Potter and the Sorcerer's Stone. Back in November we had Girl Scout Leader/Daughter camping and it was Harry Potter themed. We watched the movie before a few days prior to camping because we didn't have time to read it together before camping. (Another book rule: You Have To Read The Book Before You See The Movie. I broke it for them.) She asked for the book when we got home and thankfully I found it (along with numbers two and three.) She started it, read a few pages and then got distracted by another book. She still wants to read it though. I think it will be a challenge for her and she'll need some help with some words and character names but she can do it.

6. Geronimo Stilton and Thea Stilton series. She really likes the mix of illustrations and type in the stories. They're easy and fun reads.

7. Ivy and Bean series. Emma has all the books and has read the first, second and last book. (Clearly, she did not follow my first rule.) They're pretty funny and are full of teachable moments, since Bean is quite the character. I like her better than Junie B. though.

This post is part of a list-making project called Lists With Friends 2014, an effort to document the year in lists of all types.


Okay, so it’s taken me a while to post these, but they’ve been done! I’ve discovered doing two weeks at a time is working well for me. I’ve got a couple things to do to finish up weeks 3 and 4 and have already started on the pictures for weeks 5 and 6. 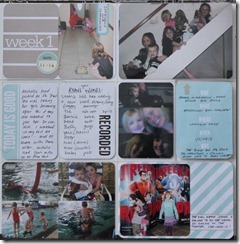 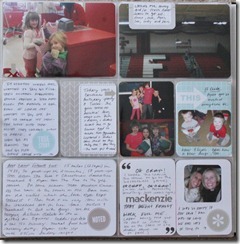 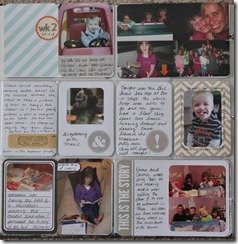 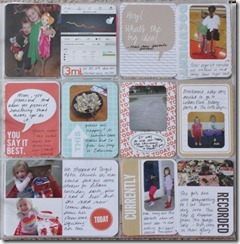 I’m loving the Seafoam kit. It’s made putting the weeks together very easy. I’ve only added other cards a couple times. I’ve been keeping it very simple and it’s coming together much quicker than last year!
Posted by Erin at 2/15/2013 03:30:00 PM No comments:


So, I know I said I was not going to get sucked in to a ton of free printable journaling cards for my 2013 album. And I’m not. Really. But I have come across a few must-have freebies that are too great not to share.
First up, are these weekly circles you can use for your weekly date cards. My plan for this year is to stick with the same basic format for each weekly date card to speed up the process. I’ve finished the first two weeks already but now that I’ve downloaded these, I’m going re-do the date cards using these and continue with them for the year. They’re made to match the Seafoam kit, which I’m using, and are awesome.

Source: September Blue blog
And then tonight on Pinterest, I saw these winter filler cards. The temperature this week is going to get down to 13 degrees, and that’s not with the wind chill, so I’m thinking these cards will be a perfect addition to the week. 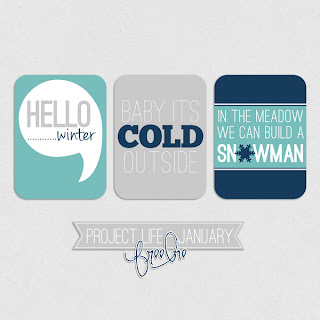 And lastly, these tags by Angie Blom. Cute to add to photos or blank journaling cards. 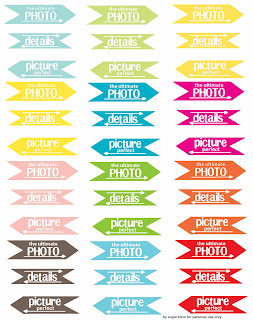 And now, it’s time for me to do some printing and cutting. 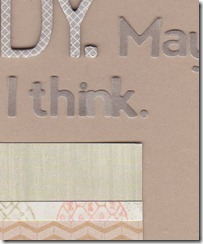 Be sure to head over to write.click.scrapbook. February 1st for the gallery reveal. And if you head over to our Facebook page you’ll find links for more sneak peeks from our team members.
Posted by Erin at 1/20/2013 05:47:00 PM No comments:

It's time again for the Write.Click.Scrapbook. sneak peek!

The December (ack!) gallery will be up December 1st. Until then, can you guess what the theme is? 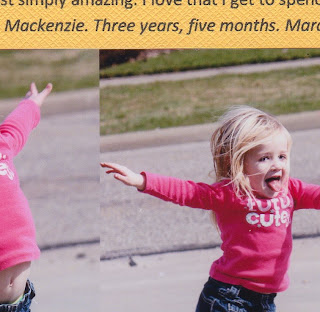 It's a write.click.scrapbook. sneak peek!

Today, the write.click.scrapbook. team is sharing sneak peeks of our November gallery layouts.

Can you guess the theme? 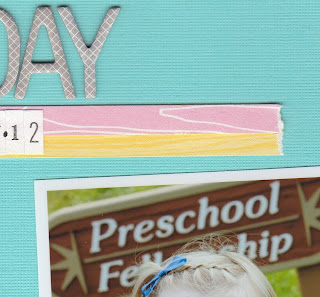 Check out  WCS's Facebook page for links to all the blogs and sneak peeks then check out write.click.scrapbook. on November 1 for the full reveal.

And the winner is...

Marg Van Patten said...
Little guy on the go for sure! Love the layout ... thanks for the inspiration!
4:42 PM

Email me at esweeney21 @ gmail .com and the gift card is yours!

Thanks for stopping by for the blog hop, I hope you all enjoyed it. Thank you for supporting write.click.scrapbook!