Mackenzie is loving and sweet, funny and cuddly. And energetic, naughty, sneaky, a climber, stubborn. She's got a personality all her own. She's a bit of a wild one. She makes us laugh she's so silly. You can't help but love her. 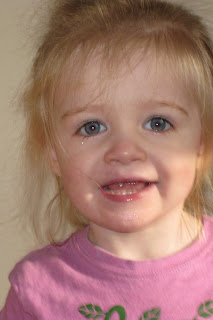 But taking her anywhere is an adventure. As Michael has said, sometimes you don't know whether to spank her or hug her. And in honor of some of our recent adventures, here are some of my Top 5 Worst Public Outings with my daughters (said in a completely loving way, of course), I'll save Emma's for another day. For the record, Mackenzie takes 3 of the 5 spots all by herself.

Heinens (a grocery store): The kid car-carts at Heinens are like cozy coupes with carts attached to the back. This is not good. I discovered this when I put Emma and Mackenzie in one. Since it's in the front, they're at floor-level. Not an issue for Emma. For Mackenize? It meant she could somehow be buckled in, yet have her arms and upper body laying outside the car on the grocery store floor. That was just the beginning. By the time we checked out, I'd placed her in the actual cart so I could hold on to her. Unfortunately I had to take a hand off her to pay. That's when I cashier said, "excuse me" and pointed. To my child who was now laying spread eagle like Superman on top of the cozy coupe about to dive head first off the front. Awesome. (One.)

Target: We're in the shoes. I'm in my socks trying on boots. Emma's in the cart. Mackenzie's standing next to it. Next thing I know, I'm chasing her past the shoes, the kids clothes and finally catch her in the plastic tub aisle. All while leaving Emma in the cart. That was after she'd screamed for two-minutes straight, she had donut glaze on her face and in her hair b/c I'd left the wipes at home, Emma had glaze on her face as well as a grape juice mustache and I was sweaty and a mess in my workout shoes. I know every person there wanted to give me the mom of the year award. It was that great. (Two.)

The pediatrician: Back in December when I took Emma to the doctor for what turned out to be her UTI, I had Mackenzie with me. No stroller, b/c I thought we'd be in and out with a virus diagnosis. Instead Emma had to pee in a cup, I got a long explanation and instructions from the doctor and we were there for what felt like forever. Way too long for Mackenzie. She was all over the room. Climbing on me. Talking and yelling and I'm sure crying at some point. I couldn't hear half of what the doctor told me I was so distracted. It was awful. So when Emma recently had her 4-year checkup I thought I'd avoid all that by putting Mackenzie in her stroller. It didn't work. She hated being in it (which usually she doesn't mind) and took of her shoes and socks, yelled, fussed. But the best is when I was looking at the doctor with Mackenzie behind me and he said, "nice trick she's got there." I turned around and there was Mackenzie standing up in the umbrella stroller. Apparently even a 5-point harness tightened all the way can't contain her. I was just waiting for the parenting tips from the pediatrician to start coming. Surprisingly, he just smiled. From now on, Mackenzie will not be going to the pediatrician unless it's actually her appointment. (Three.)

Tuesday we went to the library. Again, the stroller does not contain her. And I knew this. Yet it was my best option so I went with it. Until she climbed out of it. Twice. I told Michael she wasn't going back to the library until she was 7. He asked if they kicked her out. When we left, this is what she looked like. 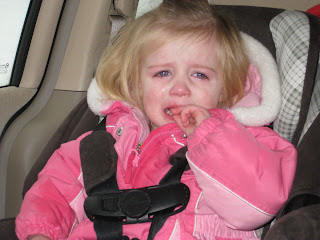 Apparently, the stroller is no longer an option. Sigh. At least we made it to 27 months with it.

Then lastly, the grocery store on Wednesday. I just needed to run in for one thing after play group. One thing. We can do this. We can walk in. Get it and leave. I should've known better. It started well. I got what I needed and we headed to the register. Then Mackenzie saw the playground balls, all glorious and beckoning in their Diego and Mickey Mouse designs, just calling her name. They make them waaaay too easy for 2-year-olds to get. She wanted to dribble. And dribble she did. Two of them. While I attempted to gather and get them back in (not nearly as easily as she got them out) the girls were gone. Mackenzie took off, and Emma went to get her back. Which means she chased her. Which just makes her run faster and get crazier. Of course, while this seemed like an eternity to me, it all only lasted a few minutes. If you were in the Solon Giant Eagle Wednesday morning, I was the mom who had no control of her kids while holding a jumbo box of frozen TGI Fridays potato skins muttering "I hate the two's."

So, what's your worst shopping experience/public outing/stroller escapee like? I can't possibly be the only one with stories like this!

I still can't believe she's four. Sigh. But she is. We had Emma's party on Saturday and she loved it. It was princess. And very purple and pink. And perfect for her.

We started out with dinner at CiCi's, her pick. She really wanted macaroni and cheese pizza. 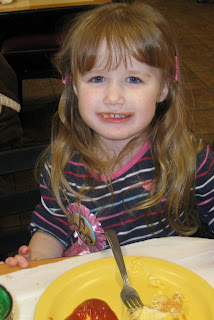 Then we all came back to our house for presents, cake and ice cream. The polly pockets were a huge hit. As were all gift princess and the Dora nightgown, which she wore for the rest of her party. 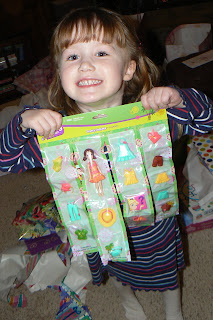 Before Emma could blow out her candle, Mackenzie leaned it and blew it out. We re-lit it, and it then took Emma four or five tries to blow it out. She didn't mind though. 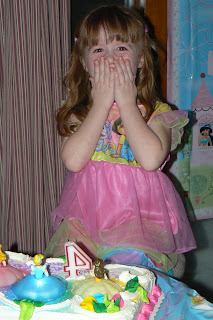 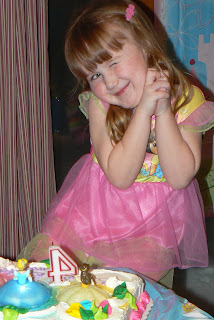 Here is the recipe for Abby's Chicken Muffins. We had them tonight. Yum.

How I make it: I break the biscuits into pieces and press them down into the muffin pan so there's an even amount in each. Doesn't matter if they don't look pretty, they get covered anyway. I usually shred my chicken, just because I like it better that way. I use cream of chicken soup. I don't measure the cheese, just dump it in until it looks good. :) Oh, and I usually grease the pan, because they do stick a bit coming out. They're quick and easy to make and we all really like them.